A new semester, a new class looking for blog posts, and I try not to disappoint.

Our reading this week was about the beginning. The early chapters of the Bible, concerning the creation, the flood, and the stories that happen in that. Interesting stuff. One of the thngs that strikes me about it is how much time elapses. If the numbers for years means the same as we’re used to, a thousand years pass in these chapters, and many many thousands upon thousands of people in this newly created world are born, live, and die, with only a handful getting a mention. These weren’t nobodies. These were people that mattered. With a new world before them, there are some heroes glossed over. The person who invented cheese, the person who domesticated the first dog, the person who figured all the wheel. These are people who were passed by without a mention. (How good of a hunter was Nimrod, that he got better press than the first cheesemaker?? And what does he think about Bugs Bunny turning his name into an insult?)

It struck me that Adam lived for a long long time, and had a lot of kids. We sort of picture his family photo consisting of just him, Eve, and their three sons. Or two sons, depending on when the photograph was taken. But he had a bunch of kids (Gen 5:4). It really throws off the count if you don’t number the number of kids you have. Although I suppose its possible that people lost count. We don’t have record of how long Eve lived, but Adam had over 900 years under his belt, and Seth came around after a hundred years after the Cain and Abel bit, so age probably didn’t mean as much to them.

Which makes sense, if you think about it. If some Supreme Being is looking to fill a world, cheating in some longevity for the first few generations, just to get the ball rolling, makes sense.

Adam’s death was probably a momentous occasion, though. Imagine a man who’s lived for a millennia, and how much impact he’s had on the lives of all his descendants. Sure, as the populations get older, they might not be as close, so don’t we visit great-great-great-great-great-grandpa as often as we should. But he was always there, you know? He’s seen so much, and even if he doesn’t understand all this new-fangled technology like crop rotation or cows, but he can point to one of his kids who does know what you need. He’s proud of all his children, and their children.

I wonder if Abel was the first death. We have him identified as the first murder, but maybe there were others who ran into accidents, like poisonous berries and irate rhinoceri. As am older brother, I wish Cain hadn’t wasted a great excuse for not being at fault for your brother’s choices as a way to try and deflect suspicion of murder, to GOD. Now I can’t use it when trying to explain why the trash hasn’t been emptied.

If all of these reflections seem flippant, that’s because they are. These are stories that I’ve heard so many times, I have to really dig down and reflect to find something new. It is there, in these tales, but it’s not really something I can share. Future posts might have a dab more spiritual content. I find the creation a bit rough to study, because of how little we understand exactly what happened. We have such a narrow slice, like looking through a keyhole.

Learning that snippets of these early days are different from what we were told won’t shake my faith. There’s already some of the parts of this story that I take with a grain of salt. I think the creation happening in six phases rather than six literal days makes a lot more sense, and maybe there were more people than just Adam and Eve, and they were just the more important. I don’t know, the little fiddly bits of what went on doesn’t matter to me as much as the big picture.

There was a plan set up, where we spirit children of our Heavenly Father needed to come down to a planet, get our selves a body, learn and grow and be tested, and then return. A world was sourced, and the plan was set in motion. That plan is the important bit. I don’t really mind if God snapped his celestial fingers and made a thing, or if he popped down to Magrethea and commissioned it from the artisans there. Or maybe it was a build your own kit from a Heavenly Ikea. The point is that that isn’t the point. I’m here now, and my focus needs to be on doing my part to deal with the plan, namely: figure out what I need to do, the steps I need to take, to return to Heaven at the end of the journey. Everything else is just the fiddly details that aren’t as important.

I wanted to find a way to work this cartoon earlier, but it never felt like the right time. So I’m popping it here at the end. In my Institute class for the Old Testament, I loved to find an obscure scripture and make a little cartoon of it. It took me a lot of pondering to find something in these chapters that I had not seen before. They’re a very beaten path, comically. I’m going to try and have these for every week I have a blog article to write. 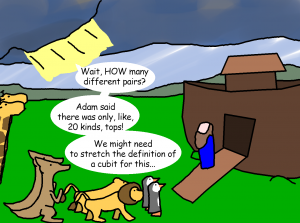 (My personal rule for things like these is to not look at reference, so I present the worse kangaroos ever drawn. Bad enough to make an aborigine say “What is it?”)