This week, we had the massive task of covering Genesis 12 through Genesis 50. There is a LOT that happens in these chapters. This goes from right after Noah all the way through Joseph. We have all of Abraham, all of Isaac, all of Jacob, and even all of Joseph and his brothers. Sorry, Reuben and his brothers (as an eldest brother, I have to try to show solidarity and give top billing where it is due.) So much goes on in here that I could talk about. I noticed that there was a lot of forgiveness going around, of people forgiving thieves and liars when it was the protagonist doing them.

I had someone point out to me that these chapters would have been passed down orally for the most part, before being gathered, which would have the effects of smoothing away some of the mistakes that would have existed into these characters being smooth operators. It would be fascinating to see how all of these stories became what they are. Like a game of narrative telephone, where each version is slightly different.

The core of my thoughts this week is on Joseph, and the people who he apparently blew out of the water as an administrative contractor. After being sold into slavery by his TOTALLY JUSTIFIED brothers, Joe becomes the chief of Potiphar’s household, and in an unspecified number of years, the running of the house, including all of the books and accounts was no longer done by Potiphar, MBA and wealthy and powerful businessman, but by a random first gen Israelite who didn’t even speak Egyptian when he was brought home.

Then, years later, he runs the jail from the inside, and then is hand picked by Pharoh, son of the Sun God Ra, to run the government agricultural taxation and public welfare program, with lodgings, a trophy wife, and a company chariot.

So what can we learn from his shrewd business acumen, that we can use to guide our lives upwards in these trying times?

I don’t know how feasible any of these are in today’s modern world. Some might be discouraged or downright illegal. Keep your noses clean, but if you need a scriptural role model from the scriptures to make your way in the workplace, you’d be hard pressed to find a Biblical someone as savvy as Joseph. 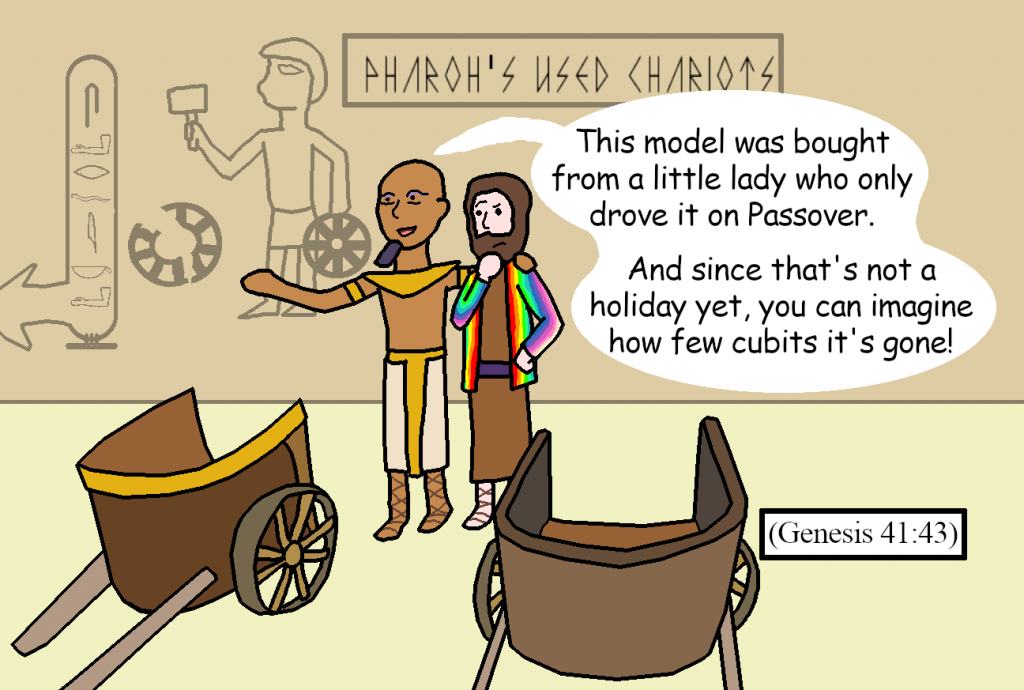