This week, we blaze through Deuteronomy, Joshua, and get 12 chapters into Judges before stopping to save Samson for next week. And through the course of these chapters, we see a kinda scary truth cropping up: The people of God are brutal. There are several times where the Lord gives the command of “No Quarter” or “Scorched Earth” and the Israelites comply in what I’m sure was a terrifying report for all those who were still in their territory-yet-to-be-claimed.

I want to talk about this fearsome reputation in a few different parts today. We’re not ever going to get into the stuff in Judges, because it’s crazy. It’s like their history was compiled by Ripley’s Believe It or Not. But my random thoughts will come after the spiritual one today. Why did the Lord want just the Israelites in this land? Why was it so important to purge the region? I think it has something to do with the idols. Not that the people of Israel would fall into such practice, because they do, often, but rather, I think it has to do with expectations.

Look, I can’t remember if any actual idols were called our, so let’s just use Baal. We’ll cover him in more detail if we get to Elijah, but for now, he’s our stand-in for all the idols. Doesn’t talk much, do he? No matter how you pray to him, he won’t answer. Maybe he’s asleep, who can say? But I think that with with all these neighbors worshiping dumb statuettes, the Israelites weren’t going to join in, but rather, they’d begin to not expect an answer from God. And then, when they pray to the Lord, and nothing immediately happens, the Israelites are inclined to think “Oh, He’s not answering like the others. Why is Joshua the one solely speaking for him, then, instead of, say, me?” And that way lies trouble.

Without that negative example of worship, there is a chance, however small, that the Israelites can keep on track for a bit. And in our lives, we need to look at those around us. What idols are they praying to? Are we trying to bark up that same tree? What are we doing to keep ourselves actively seeking answers and asking questions and working towards the right?

Serious talk over, on to the random thoughts.

The Gibeonites are a people you don’t hear a lot of. Probably because they were slowly joined with Israel and they went our with a whimper instead of a bang. But their plan was genius. “Oh, the Israelites are coming? Let’s fake being from a distant nation and enter an alliance. Surely, they won’t pillage an ally, right?” Apparently not, as they let the Gibeonites become the blue collar workers of the Hebrew nations, quite possibly the same role the Hebrews played in Egypt. It’s so weird to think of servitude as being the better option, as fiction has spent considerable effort to teach us that Living Free or Dying is the right way. But they did live, presumably for a few generations longer. (Joshua 9)

Speaking of pillaging, let’s talk about Achan. What was going through that guy’s head? (We’re in Joshua 7 now, btw.) Like, I can understand looting as part of destroying things. You see something shiny, you loot. Simple enough. Does the Lord have a reputation for being all prophetic? Not as much as he does later, I guess. Maybe that was it. But the army loses, and when Josh goes to the Lord, he learns the the previous directive of “Don’t loot here” was broken. Now, it doesn’t say that they made an announcement with an assembly, where they called for the guilty to come forward. That’s how they’d play it in a movie now, I reckon. But still, Achan knew he was guilty, because you don’t bury things if you feel confident in them. How many levels of the entire population being split off like some magic trick, each time keeping the part with you in it, the group getting smaller and smaller each iteration, where do you break? When does your nervousness kick into overdrive?

Manna stopped as this was going on, which is an important detail. There’s some poetics to being in the promised land, although its not quite yours yet, but the promise is fulfilled. I can see that logic. But I’ve also studied a bit of tactics, and a people that can always guaranteed that their army is well fed tend to do well in battle, and an army who have no supply lines other than making sure they have the ground with them when they’re hungry takes a nightmare of  logistics and makes it a simple thing to get the people fed.

The comic this week is based on the Biostats I’m in right now, where I could probably calculate the number of fleece samples needed to take action, but that sounds like more work than the joke is work. 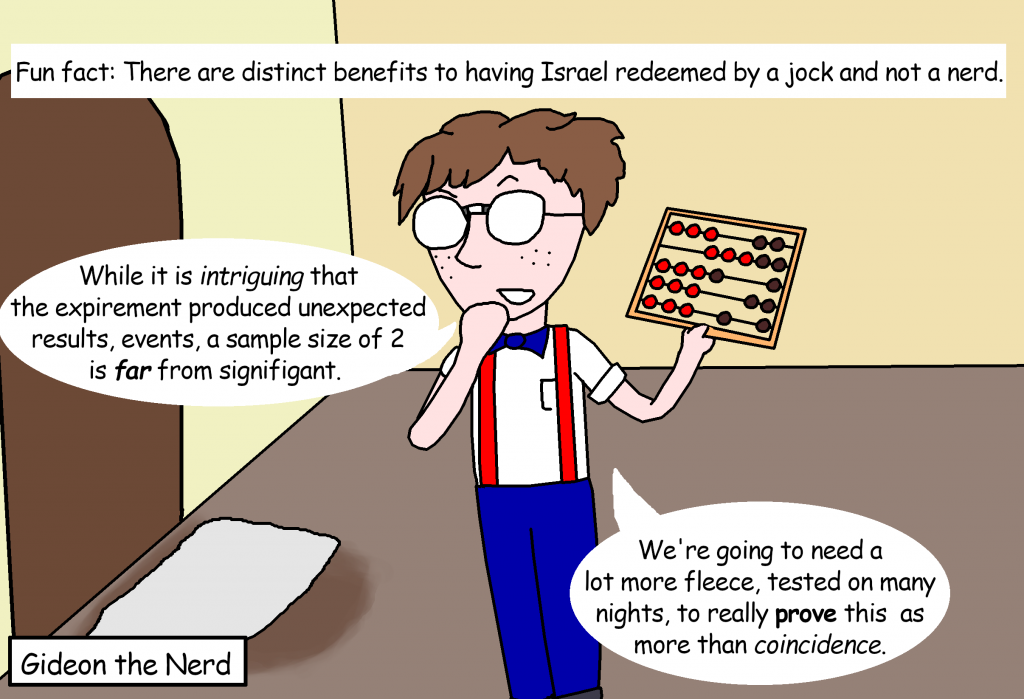 There was a second joke of Moses being a fan of Dwayne Johnson in Deuteronomy 32:4, 31, but I’d prefer not to have the joke ride on a caricature, thanks.