This week, we’re to find some instance of deposition of material, dirt, sand, silt, dust, etc, and answer some questions and speculations.My photo comes from near the gamestore, where there was plenty of ice and snow still, even with how warm the last two days were. 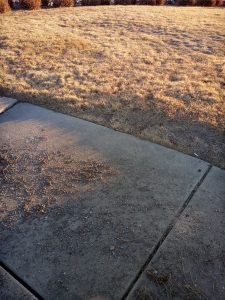 It appears to mostly be gravel, with a bit of sand and smaller bits. Likely, this is remnants of sand-like materials being used for traction on ice at a nearby parking lot, then it’s picked up as the snow is plowed and is moved here, where it melts. Some of the smaller particulates have flowed with the water currents.

Question 2: How about the sorting? Would you expect the grains to be well sorted, poorly sorted?

This sample does not seem to be well sorted. This section is probably more akin to glacial melting, rather than flowing water and blowing wind. There is some element in sorting, however, that until it is swept, the smaller particles are going to be removed, leaving only the big and coarse pieces.

The majority of the pieces appear to be angular, indicating that these rocks haven’t had much weathering in their travel.

Question 4: Is this a high energy or low energy environment?

This appears to be a low-energy environment. Not much is moving, now that the snow and ice have mostly melted. If we get some rain, that will chainge it all, though.

This is a question that indicates that I grabbed a bad sample. This isn’t really a deposition, this is the rock source upstream. There are some indications on the right that water was flowing and clearing a path, and if you squint, the gravel does appear to have the start of some dune formations, but it’s too early to tell.

Question 6: What type of sedimentary rock would be formed if this area were to immediately compact and cement into a rock?

It’d probably be some form of conglomerate, although I could be talked into saying it could be a coarse-grained sandstone. There isn’t enough material in my poor sample to really answer this question in a meaningful way.

So there you have it! Another journal where I assumed this would be easy, but then messed up by not reading the assignment before starting. If I had done this right, I would have actually followed a water stream to a place, and then had some decent pictures.

Actually, I thought about going to the Sand Dune Park for this, I only live about 2 hours from it, but didn’t commit in time. I’ll try to keep that in my head for next time.