So this week, we’re looking at mid-ocean ridges and identifying parts of those that we see.So I opened Google Earth and started screencappin’. Browsing around, I found a likely subject. A place called Necker Ridge, north west of Hawaii. It looked like a perfect spot, except there doesn’t seem to be any plate boundaries in the area, which is unusual. Ridges are formed near boundaries, whether constructed by lava rising up as divergent boundaries separate and let the molten rock seep up, or from one edge of a convergent boundary being forced up.

With no boundaries in sight, I turn to google, to see what I could find about Necker Ridge. What I found was interesting. It’s newly mapped, with multibeam echo sounders defining it in 2009. But exactly what it is, and how it was formed is a bit of a mystery. Browsing articles, it seems that it provides a definitive break between the flora and fauna on both sides of it, so it acts as some sort of barrier. 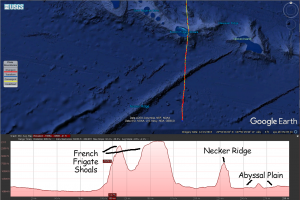 Apparently, in 2019, there was a live stream from an oceanic expedition to the region, which is fascinating, that we live in a time where anybody can tune in, and observer as scientists are doing real life research. I find that really cool and I might have to research that part further.

So while this may not be exactly what the assignment was supposed to be, I hope you found it interesting and informative.