I had a not great week this week and need to do something quick for content today. I have like 4 or 5 articles half written that need a bit more time to percolate, so instead of forcing one of them out early, we’re going to play a game.

I saw this through Nerdarchy, who got it via Arcane Emporium apparently? I couldn’t find an original, sadly. It’s a game of 20 questions for DMs, concerning their D&D History and play. I gain 1 level per one of these I’ve done, so wish me luck. 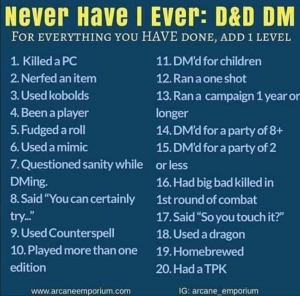 Have I ever killed a PC?

I want to state, unequivocally and for the record, that my hands are free of PC blood. Any deaths that have occurred at my table are NOT MY FAULT. There have been 5 that come to mind.

Have you ever nerfed an item?

Yes. Most recently, Ryan was given a Trident of Warning before I read the whole statblock. That is an annoying weapon, as the DM has to keep it in mind for the ENTIRE party. So I just made it give advantage on initiative or something. I’m also reminded of a lute I gave to Garret during the Ruins of Helren that allowed his bard to do dual concentration, which is a mistake I will never make again.

Have you ever used Kobolds?

How can you not use kobolds???? They are amazing! Well, if you’re doing a comedy game. And Goblins can occasionally take that slot. But the best part about kobolds is imagining them wearing all sorts of incongruous hats. That and all of the silly traps you can use.

Have you ever been a player?

I have! I’m a lot more #ForeverDM than when I started, but honestly, I’m one of those DMs who’s hands twitch towards the reins when I’m a player. I’m always building stuff for the world and pushing my stamp onto the world.

Have you ever fudged a roll?

I tend to fudge results, as opposed to actual numbers. You rolled a 7 on your History? Well, let me tell you some details.” I’m more likely to give the party more stuff than less. And I stopped having monsters do Critical Hits, so fudging went way down once I just made it my policy.

Have you ever used a mimic?

I’m not as enamored with mimics, partially because it’s a very meme D&D creature. My favorite thing I’ve done with them was thought up on the spur of the moment. The player sees a portrait, and when they look back, the image looks like them. Or the person in the portrait is gone or something. Something that makes the player sure there/’s some trickery going on. Turns out, mimic!

Have you ever questioned sanity while DMing?

I mean, I think my players might have questioned mine?

Have you ever said “You can certainly try…”?

This is one of the phrases that graduates you from a player behind the screen to an actual GM. It’s best said while frantically trying to decide what would happen if they used Stone Shape on the floor of this tower, while simultaneously praying fervently that they’ll just do the stupid quest the simple way.

Have you ever used Counterspell?

Hmmm. I’m actually not sure on this one. If I did, it was with Tera. I don’t think I’ve had an NPC use it, although the tail end of Tomb of Annihilation was pretty wack. I’m normally running for lower level games, ToA was the highest I’ve run at. (Well, besides the L20 game(s)…)

Have you ever played more than one edition?

At the same time? I don’t even know how that would work? What’s that? Oh.

Have you ever DM’d for children?

Hmm. I think the youngest I’ve had was Zeke who I think was 7? I’ve run a lot of games for younger teenagers, though.

Have you ever ran a one shot?

Yes, but I’m not good at them. I would be interested in a D&D Roulette, where all participants brings a one shot, and level X characters, then it’s randomly determined who is DM when the game starts. That would improve my proficiency with this important part of D&D

Have you ever ran a campaign 1 year or longer?

I’m defining a campaign as the same players, characters, and story. No is my answer. Tomb of Anhilation was my longest at 34 weeks. I think Chaotica was around that maybe? I have high hopes for Year of Eberron and the J-Team.

I cut my teeth on an 8 person party back in 4e. My personal best was a 5e game with 15 people. I’m not scared of large groups, although the game changes a LOT when you increase it’s size. 3-5 is the optimal number of players, (3-4 online).

Of course, smaller tables mean that the threat of cancellation is a lot larger. So watch out for that.

Have you ever DM’d for a party of 2 or less?

Yes, but it takes effort for me to psyche myself into being able to actually start running. I’m more likely to stall, talking about other things, and end it early. But I have done, yes.

Have you ever had a big bad killed in 1st round of combat?

Depends on definitions. If you mean the boss of a dungeon, then, probably? But like, campaign level? If your boss is going down in a single round, you’re not cheating hard enough.

It hasn’t happened in a long time, but I think in one of my 4e games, I gave a villain a Damage resistance 15 amulet and the party STILL took him down in one round. Then I animated the trees for some quick extra monsters, but yeah, I think that counts.

Have you ever said “So you touch it?”

The other DM graduation phrase. This one means “I know exactly what it does and I’m confirming that you take full responsibility. I don’t use this one as much. I prefer “Describe exactly how you are doing X.” Keeps them guessing on what the trigger exactly is.

Have you ever used a dragon?

Yes I have, but not very often. I keep running worlds where dragons are special and not just monsters to fight and loot.

Have you ever homebrewed?

This is another one where the definition changes the question, but the answer is still yes. AL players tend to have homebrew mean “A home campaign.” Other D&D players make homebrew mean “Build new monsters and items” and I can also see homebrew as meaning “Build an RPG from scratch.” I have done all of these.

Have you ever had a TPK?

Wait. I think I technically have. It wasn’t a big party, just 2 players, but the fire elemental did technically kill the entire party I had that night.

I think, after all of that, I’m a level 17 DM. All I have left to do is to use Counterspell, run a game for a year, and question my sanity.